Mathematics at the university of Göttingen
Current site: 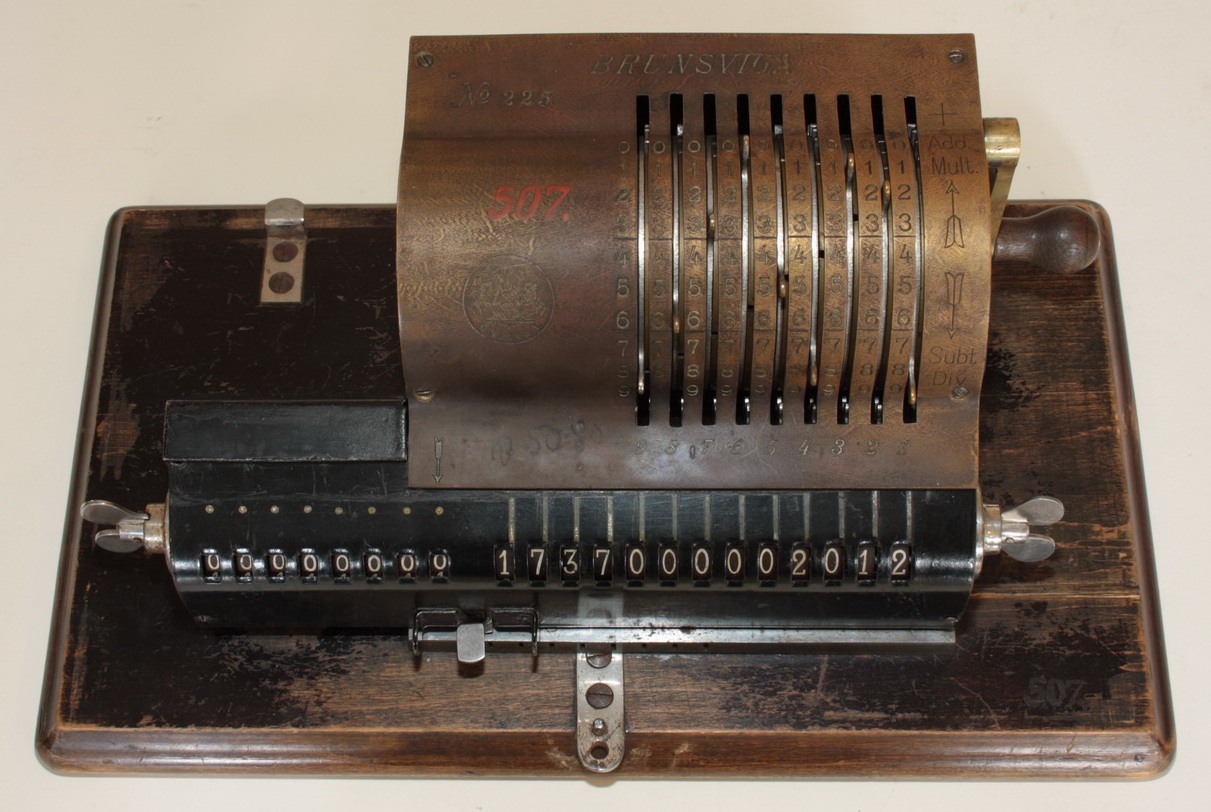 Calculating machine Brunsviga, old model, from the model collection of the Mathematical Institute

Today, nearly no layman and perhaps only some scientists know that the development of electronical calculating machines in Germany began 40 years ago at the Max-Planck Institute for Physics in Göttingen. Dr. Heinz Billing had an essential part at the development, who - amongst other things - 1948 invented the magnetic drum storage. This pioneer looked back to the difficulties in the childhooh days of the computers: "Despite the crowd of scientists with great names like Max Planck, Otto Hahn, Werner Heisenberg, Max von Laue and Carl Friedrich Weizäcker, the working conditions for all the ones working experimentally were more than poor. The machines, still coming from the War [WW2], were demounted or - despite their miserable conditions - were looted ... Out of supplies of the former Wehrmacht I at least owned some amplifier tubes, some gauges for electricity and even a small, quite simple cathode ray oscillograph ..."

To provide the physicists with a powerful calculating machines as soon as possible, 1951 at first the small G1 - G standing for Göttingen - was built, which from 1952 on was the first electronical machine in Germany in action. Soon, it was used so extensive that many users had to sacrifice their night's sleep. Even at Christmas season it was calculated, a guest of the Institute of Muslim belief used this chance of the Christian celebration. The first big calculation program of the G1 concerned the theory of cosmic radiation: with this machine it was calculated, which orbits the particles of cosmic radiation of the magnetic field of the earth specify. The G1 could do two operations per second. It was operated by perforated tape and a common typewriter, under whose keys were attached contacts and magnets. From November 1st, 1952 to June 30rd, 1958, 33,946 hours at all had been calculated on the G1. The G2 could calculate twenty times as fast as the G1, which on january 1st, 1955 was put into operation and which calculated 36,076 hours until June 30th, 1961. A long way 40 years ago from the G1 to the modern computer was covered. One of the few remains of the Göttingen calculating machines, which long ago were scrapped, is a matrix of the G3 consisting of 32 times 32 ferrite cores, that back then cost 512 D-Mark after all.

The G3 was equipped with two significant technical improvments with which it widely exceeded its precursors G1 and G2. Since 1952, the ferrite core being a magnetized storage element was developed in the USA. With this progress it was possible to build faster storages than it was possible with the magnetic drum. The G3 had a storage of 4096 words, having each 42 Bit plus 1 bit-flag, corresponding to nearly 180,000 ferrite cores, which cost about 90,000 D-Mark. Secondly, the idea of microprogramming coming from England was realised. Complex operations such as the multiplication of two floating-point numbers were build into hardware out of composed low-end micro operations being physically realised by chains of ferrite cores and diodes. The 64 machine instructions corresponded to 64 of those chains. This beauty of the Göttingen calculating machines development was put into operation on january 1st, 1961 and worked steady until november 9th, 1972. 1971, Nobel prize winner Werner Heisenberg said: "These calcukating machines have done us priceless services. It alway felt bad, that later, when the computer technology developed really fast, so that it had to go beyond the scope of the Max-Planck Institute, the German Industry did not develop it further with all its strength. Because of that, the lead of the computer technology totally migrated to America ..."

Relation to the world

In November of the year 1951, the Federal President professor Theodor Heuß visited the city of Göttingen. The occasion was the two hundred year old existence of the academy for science, whose president back then was Werner Heisenberg. Heuß used this opportunity to make a visit to the Max-Planck Institute for Physics, where amongst others the calculating machine G1 was presented to him. In his speech at the town hall, the Federal President said - how the Göttingen journal reported on november 10th on the first site - "a profound, true word about the relation to the world to our city, which easily gets lost in our everyday life, and incidentically exposed the essential core of the Göttingen way of life." - Theodor Heuß said: "Göttingen is a small city, but through it go the world's greatest streams!"